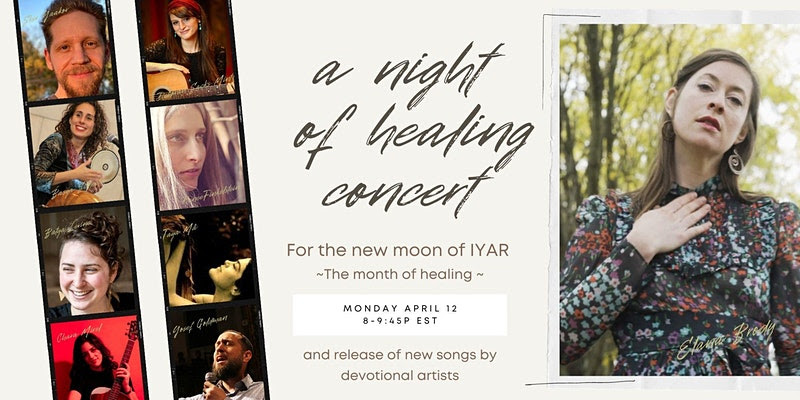 Warmly inviting you to a night of healing, online.

On the New Moon of Iyar, known in Jewish tradition as the month for healing, we will gather in community to witness the offering of new songs for healing, that were written over the pandemic. Featuring 9 devotional prayer-artists, listed below, and the inspiring teachings of Rabbi David Ingber and Rabbi Jill Hammer.

In addition, at the end of the night, Elana Brody will premiere the never-before-heard release of her prayer for angel protection "B'shem Hashem."

We invite you to bring a candle to light, and to have in mind those in your life who are needing prayers for healing at this time.

Deborah Sacks Mintz is a composer, ba’al tefila, and educator, serving communities who seek to deepen their practice of empowered song and connective prayer. She can be found regularly facilitating leadership workshops, song circles and tefila experiences, as well as collaborating artistically with a diverse array of voices in the Jewish soundscape, Her debut album of spiritual music, The Narrow and the Expanse, was released on Rising Song Records this past spring. Deborah is pursuing rabbinic ordination at the Jewish Theological Seminary, and serves B'nai Jeshurun NYC as a rabbinic fellow, as well as on faculty at Hadar’s Rising Song Institute . Learn more about Deborah's work at www.deborahsacksmintz.com

Yosef Goldman is a singer and composer, prayer leader, and educator whose original Jewish music is sung in synagogues, schools, and camps across the country. As a performer and composer, Yosef weaves together musical forms from both his Mizrahi and Ashkenazi heritage—including Chassidic niggunim (devotional melodies), Sephardic piyyutim (sacred song), and contemporary American Jewish sacred music. His first album, Open My Heart, released by Rising Song Records in winter 2019, is both deeply innovative and firmly rooted in traditional sacred Jewish music. He is a longtime featured vocalist with Joey Weisenberg in the Hadar Ensemble and a founding member of the Middle Eastern Jewish music ensemble the Epichorus.

Chava Mirel is a Grammy award winning singer, and an internationally touring Jewish composer, spiritual leader and activist. Performing in Folk, World Music, Jazz and other genres, she imbues her music with the universal themes of hope, caring, connection and inclusion. Highly sought-after for collaborations and recording, Chava is known for her rich, luxurious vocals, lush harmonies, and rhythmic phrasing. From electrifying concerts to engaging educational sessions to inimitable spiritual experiences, she connects to community with love and compassion. Listen to Chava's latest release here.

Taya Mâ Shere plays passionately in realms of transformative ritual, embodied vocalization and ancestral healing. She is co-founder and Rav Kohenet of Kohenet Hebrew Priestess Institute, and is on faculty at Starr King School for the Ministry, named the most progressive theological school in North America. Taya Mâ hosts the Jewish Ancestral Healing podcast and offers online courses including Embodied Presence and Pleasure as Prayer. She is co-author of The Hebrew Priestess: Ancient and New Visions of Jewish Women’s Spiritual Leadership, and creator of the Liberate Your Seder Haggadeck. Taya Mâ’s Hebrew Goddess chant albums have been heralded as “cutting-edge mystic medicine music.” Her newest album, Makam Shekhina is pulsing Hebrew-Arabic prayer in cahoots with her beloved collaborator Shaykh Ibrahim Baba z’’l, and their spiritual community. www.taya.ma | @tayatransforms

Rabbi Shir Yaakov Feit engages Jewish, multi-faith, and non-affiliated people around the world, building spiritual communities, facilitating and inspiring communal music, and helping people connect with their inner wisdom and truth. Shir founded Kol Hai after serving as Creative and Music Director of New York City’s Romemu, the world’s largest Renewal synagogue. He was ordained by Rabbi Zalman Schachter-Shalomi and the ALEPH Ordination Program, is a Wexner Graduate Fellow, and serves as a facilitator of the Zen Peacemakers Bearing Witness Retreats in Auschwitz-Birkenau. His most recent recording is a collection of Passover inspired music called This Night, composed and recorded in collaboration with Renee Radharani Finkelstein. Listen here to This Night.

Batya Levine (she/her) uses song as a tool for cultivating healing and resilience in her work as a communal song leader, musician, shaliach tzibur (Jewish prayer leader) and cultural organizer. She believes in the liberatory power of song to untie what is bound within us, and sustain us as we build a more just and beautiful world. Batya is a founding core team member of Let My People Sing! and is a Cultural Organizer with Linke Fligl. She offers song, ritual, and workshops in a variety of communities, and composes original music made of Ashkenazi yearning, queer heart-medicine, and emunah (faith/trust). Batya recently released her first album, Karov. Learn more at www.batyalevine.com

Renee Finkelstein (a.k.a. Radharani) is a multi-disciplinary artist who weaves music, ritual, spiritual teachings, and practices to help people stay connected to their hearts and innate wisdom. She spent more than four years in India studying with great yogis and saints and traveling to some of the most remote pilgrimage places in the world. She is the Program Director and Lead Musician of Kol Hai: Hudson Valley Jewish Renewal and is a Hebrew Priestess-in-training at the Kohenet Institute. She has produced two original albums, the latest of which, “Time to Wake Up”, topped billboard New Age charts. Listen to Radharani here.

Blending a psychedelic sensibility and a pan-Mediterranean sensuality, Basya Schechter is a multi-instrumentalist, composer, producer, cantor, and music teacher in NYC. Her sound has been cultivated by her Hasidic music background and her travels through the Middle East. Currently serving as the Music Director at Romemu Synagogue, she is also a member of the band Darshan.

Elana Brody is a folk-pop artist and Jewish songwriter from the mountains of Virginia, living in NYC. She shares her versatile and inspiring musical gifts on stages and in services with Jewish congregations and organizations such as Romemu, Nevei Kodesh, Kohenet and the Jewish Federation of North America. Known for her open channel to the Divine, her virtuosic singing voice, and inspiring songwriting, Elana has opened many hearts and brought many to tears. 10-time Grammy Winner Bobby McFerrin called Elana "Cosmic." "Magnificent, stunning, holy. - Rabbi Jill Hammer